In The Dark Of The Night : Why NOAA Weather Radio Is Still A Good Bet Against Tornadoes

Posted on March 5, 2020 by tommystafford 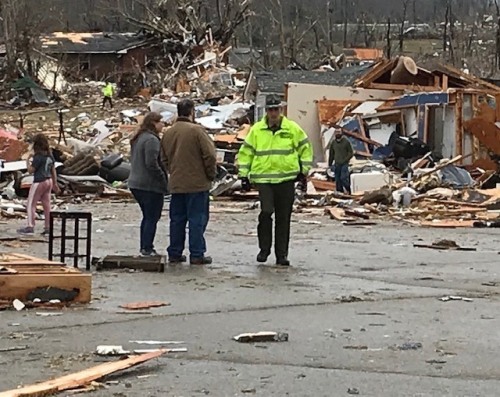 Photo via THP Cookville District : The aftermath of the tornado that struck Putnam County, TN on March 3, 2020.

A few days ago one of my best friends, Joe Markham,  began a thread on his Facebook page about the tornado deaths in Tennessee. Tennessee is my home state and where I spent most of my time doing TV weather and reporting in the 90s and early 2000’s.

I’ve covered countless major tornadoes and even survived an F5 tornado in May 2003. I was on the on air weathercaster at the time in Jackson, TN as it was bearing down on the downtown district.

After it was over 11 people were dead within a mile or two radius of the station. We were lucky. The station wasn’t damaged miraculously, but several cars on the parking lot were destroyed. In short, I’m very familiar with tornadoes and what they can do.

Troopers are assisting other state and local agencies with search and rescue efforts in Putnam County. If you did not live in a damaged area, Please do not enter the area to sightsee. pic.twitter.com/8BrtrgJpAW

Via NWS Nashville, TN : A rebroadcast of the tornado warning for the Nashville area on March 3, 2020.

I grew up in a time when warnings for tornadoes were hard to come by, especially overnight if you are sleeping. In the 60s and early 70s watches and warnings were almost exclusively delivered by television and radio. If you weren’t up to hear the warning, you didn’t get the warning. Consequently, many people died in overnight tornadoes. It’s still a problem today but not as much, and it doesn’t have to be. That said you can still get the warning, do all you should (go to basement, interior room, etc) and a tornado can still kill you. But there’s almost no excuse for not getting a severe weather warning in 2020.

BREAKING
A large tornado touched down in Nashville overnight…it looks like a bomb went off. As of 5:30 this morning we’ve learned 5 people died, and officials expect more deaths from this. Such a tragedy this morning.
(Pics: from News Channel 5) pic.twitter.com/JCwW4hIPCE

While there are many good smartphone warning apps, auto dialers to alert you by telephone (all very good methods) by far the easiest and reliable method is an inexpensive NOAA weather radio. You are getting the alerts the second the National Weather Service puts it out. Smartphone apps, while good, are all reliant on good cell signals, wifi or such to get a signal to you. In storms that’s often one of the first things to go. Especially west and south of your location where a tornado is hitting. I have many phone apps personally and use them often but I have the redundancy of a weather radio as well.

It’s not like the old days when weather radio first came out. You don’t have to hear every single alert for a wide area that might not affect you. Today it can be targeted.

Make sure you get a weather radio with SAME capability: (Specific Area Message Encoding) https://www.weather.gov/iln/nwr_same – this can specify which counties (or single county) you want alerts for vs a wide area.

Here’s the SAME code listings for each respective state / county in the U.S.
https://www.weather.gov/nwr/counties

Locally here in the Virginia Blue Ridge I use the CBS19 Weather Authority App. It can be tailored to give you as much or as little as you want . I used to do fill in weather for these guys until the end of 2019, so I’m admittedly biased, but it really is a good solid app with good notification abilities.

As for other apps, any of the popular ones will give you localized county specific alerts. I have also long used Wunderground.com app (now owned by IBM and weather channel) but you can tailor it to exactly what you want. I’m a weather nerd, so I obviously have more apps that are in depth, but that’s all the average user needs for notifications.

The bottom line, it’s simply inexcusable to not be able to get a notification of an approaching tornado in this day and age. In most cases. Severe Weather season is just a few weeks away here in Virginia and it’s already in play in other parts of the country . So take some time to invest in a weather radio and download a few useful apps to keep you informed long before the storms arrive!