I Think I Know How My Dad May Have Felt When Paul Harvey Died. And Why

Posted on February 20, 2021 by tommystafford 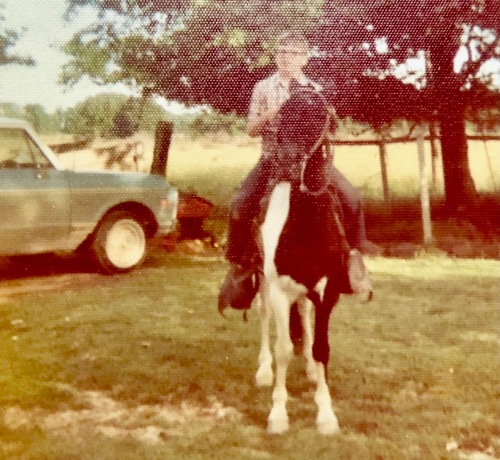 There I am as a youngster on the farm. That’s my pinto horse named Apache. This would have been around 1970 ish. To the left is my late father’s blue Chevy pickup that I remember hearing Paul Harvey playing in everyday we would ride around the farm or on my way to school.

Growing up on the farm back in rural west Tennessee I always remember Paul Harvey being a mainstay on the AM radio in my dad’s old blue Chevy truck. He’d take me and my brother and sister to school in. We lived out in the county, but my parents made the drive everyday into town to take us to the city schools.

Paul Harvey was a radio icon. He was born in Oklahoma and became one of the most widely listened to commentators on radio between 1951 to 2009. Those who remember him know what The Rest of The Story means and that famous sign off, Good Day! His last broadcast was February 16, 2009. You could hear the shakiness in his voice. He was tired, but still going at it. Just a dozen days later he died.

My dad was still around when Harvey died, Though he was in his twilight years, I know he was saddened by his passing. He probably reflected back all of those hot summer days working on the farm. Putting up fences with the truck door open listen to Paul Harvey. There was a certain comfort in having something routine day in and day out as you go about life. That was Paul Harvey on the radio. For me it was sort of neat to hear it all of the time even as a kid. I can still hear his voice as my dad drove us down that dusty gravel road leading us to the house. The July humidity so thick you could barely breath.

This past week almost 12 years to the exact date another mainstay radio legend passed on. Rush Limbaugh died on February 17, 2021.

BREAKING: Rush Limbaugh's wife Kathryn announces on his radio show that he passed away this morning due to complications from lung cancer

"Rush will forever be the greatest of all time." pic.twitter.com/FSJTfmX8ZO

Make absolutely no mistake, Harvey & Limbaugh were vastly different in their delivery and approach. But both earned a well deserved position in their broadcasting careers. Say what you want about the man, but having 22 million listeners is nothing to sneeze at. Much like Harvey was the mainstay in the background to my dad, Limbaugh became that to me. When I was piloting tapes back and forth to TV stations I’d tune in an AM station on the non directional beacon received in the airplane with Limbaugh playing as I was making the trip. When I was zigzagging across the mid-south covering tornados, prison breaks or whatever, talk radio stations had Rush on the air.

Ironically, Limbaugh grew up not that far away from me. In nearby Cape Girardeau in Southern Missouri. That was across the Mississippi River from me and up Interstate 55 a couple of hours. Like me he got his start in radio, was fired a few times, but eventually became the conservative radio mogul of the AM airwaves. He essentially saved AM radio from a sure death as FM radio was front and center and direct delivery was gearing up.

That’s me back at WDGS AM 1450 in about 1979. It was a little 1000 watt station where I got my start in far NW-TN. It was best known for it’s county music and Cardinal Baseball. Even talk radio couldn’t save it. A couple of decades later it went dark.

To understand the impact of Limbaugh, you almost had to come from the business. We all knew we were living in our final glory days before Limbaugh was ever known. There were signs AM radio was dying a slow death and Limbaugh pretty much came riding in on a white horse.

Mid-South News legend, mentor & friend the late Doug Viar (L) in this photo with me back in 2007. We were catching up at Neil’s restaurant in Dyersburg, TN about three years after I’d moved to Virginia permanently. Little did I know four years later, Doug would be gone.

His death didn’t hit me anything like that of my friend, mentor, fellow pilot and broadcasting legend Doug Viar. He will have been gone for a decade this April 2021. Doug, too, was a fan of Limbaugh and appreciated the climb he made to success. It wasn’t easy and we all know it, because we’d been there.

I’m not here to discuss Limbaugh’s politics. Heck I’m not even party affiliated anymore. Years ago I was a republican, but I left during Bush II’s second term. The Patriot Act and infringements were too much coming from a party that talked independence and freedom. While certainly not a democrat any day, I can’t say libertarians would be a great fit either, though I have voted for their candidates a couple times in the last 10 years.

I do think the vitriol slung at Limbaugh’s death by some is horrible. It speaks volumes about their personal character and an emptiness in their hearts. But again to each his own and I respect and defend free speech and a person’s right to express that. Always.

I am not sure who can fill the shoes of Limbaugh. I don’t think his wife is the person, but who knows. Maybe. One of the daily guest hosts, perhaps. It maybe someone we don’t even know. I am pretty sure Rush already addressed this before his death. I am betting he did a farewell message as well, but it’s yet to be released.

Regardless, the talk radio airwaves have a strange silence to them these days, no doubt.