Posted on April 4, 2021 by tommystafford

Doug and his wife Margaret during a visit they made to see us here in the Blue Ridge Mountains. June 2007

Ten years ago on this very day Doug Viar died. I’ve written a similar post to this one every year on the anniversary date of his death. I can’t believe it’s already been a decade.

This year’s anniversary remembrance was going to be different. I was coordinating a get together back in Memphis with some of the still remaining news people that worked with or remember Doug. Thanks to Covid that’s not happening. Doug wouldn’t have wanted us to make a fuss over him anyway, but he’d also be mighty pissed that people are refusing to live their lives now. He would be saying something like this. “People better get on with their lives. We aren’t here forever!” He would know. He died at just 69 years old. He was watching severe weather that had been developing that morning. Got up to go to the kitchen and dropped dead. Given the alternative of lingering in some horrible state, I assure you Doug would have wanted to go that way versus the alternatives.

Above, his voice became so familiar to those living in the mid-south. Doug was a real newsman. He would completely laugh at what’s become of the TV news business today. Heck, he was already making fun of most of it as he was leaving.

Doug and I met when I was a teenager. He finally hired me as a DJ at country music radio station back in the late 70s. That’s where I finally got to do a little news too. Guess you could say that was the start of my broadcasting news career.

Where my broadcasting career all began back at this tiny 1000 watt (daytime) 500 at night country AM radio station. WDSG in NW-TN Now dark for over a decade. – We played actual vinyl albums and 45’s. Bumper ID’s and commercials were cart machines. Zero automation! But some really good memories there! Circa late 70’s ish. Doug Viar was the station manager that hired me there.

Photo courtesy of Clayton Hayes. There’s me, Tod Hayes (left) and the late Doug Viar covering a presidential visit by Bill Clinton back in the mid 90s in Northwestern Tennessee. Dyer County.

Doug was a serious newsman, but didn’t like to be serious all of the time. He knew how to have fun for sure.

Above that’s Doug back in the early 80s trying to do the into for a television magazine show he produced and appeared in. It’s one of the funnest moments I remember. He simply couldn’t get the words out!

Doug was admired professionally all across the industry. Nationally and locally. One of my former weather colleagues from Memphis, Tennessee station WMC-TV said there was none other like Doug.

“I worked many remote shots with Doug Viar running the satellite truck. He was the consummate pro. We never missed a time slot and the feed was always flawless. I had enormous respect for Doug and found him very easy to work with. We lost him way too soon.” Dave Brown, retired Chief Meteorologist, WMC-TV Action News 5 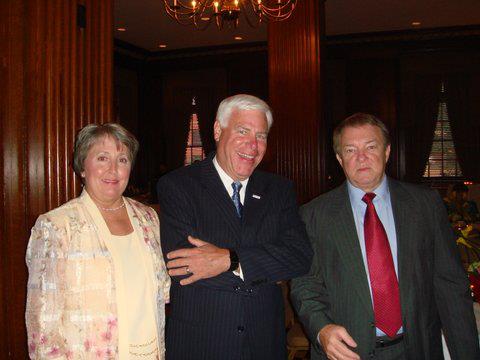 That’s Doug on the far right with Dave Brown and his wife Margaret. Dave believes this may have been at Jack & Shirley Parnell’s 50th Anniversary in Memphis.

Once I moved to the Virginia Blue Ridge back in 2004 Doug and I didn’t get to see each other as often as we once did. But whenever we got the chance, to visit we did. We talked several times a week. I remain good friends with his wife Margaret and his daughters Lori and Michelle. Also I stay in touch with his brother, George. Ironically George was my flight instructor back in 1980. Little did I know Doug , also a pilot, and I would fly hundreds of hours together chasing news stories all over the mid-south and Southeastern U.S. 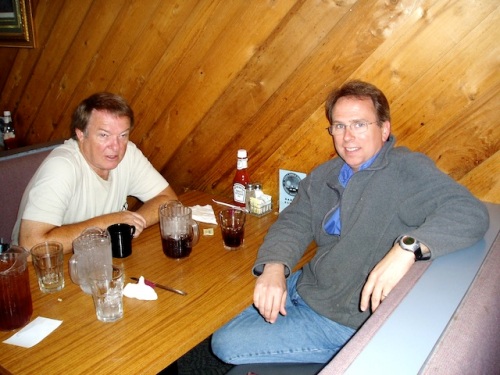 Doug and me during a visit at a local restaurant in Dyer County, TN in May 2007. I was back visiting friends and relatives at the time. We always made it a point to see one another the I was back that way.

10 years is a long time. I miss being able to pickup the phone and ask Doug what he’d think about all of the stuff happening these days. I know what he would say, but I won’t say it here. Whenever I see severe weather breaking out, or a prison break, or an airplane taking off into the sky, I think of Doug, There’s probably not a single day that goes by that I don’t have a memory of some story we went on. A missile silo that exploded, a plane crash, a barge accident, a murder, a manhunt, or dozens of other stories we covered together over the years.

I learned lots from Doug, and I hope I’ve been able to pass just a little of that on to news people of today.

See you on the other side one day Doug.