To the dismay of many of my Republican friends. Here’s some news. I didn’t vote Trump. Lord knows I didn’t vote Biden. I’ve never been that intoxicated. I voted for Jo Jorgensen. Spare me the attacks of how I threw away my vote. I had my reasons. Now that we have that off the table. There is this.

One of the reasons I often vote libertarian these days is because both parties have failed us greatly. In short. They are habitual liars and I’ve yet to see a modern day Republican for smaller government. Cutting budgets or the like. Most of them look like drunken Democrats padding the budget even more.

Which brings me to occupation in other countries. I don’t support it. Take care of the homeland and then other missions where we can. That said. “IF” we are going to insert ourselves into battles globally (great going GWB) then we should at least have the decency to leave orderly and provide stability in a transition.

What we just watched happen in Afghanistan is beyond the word failure. It’s a tremendous humanitarian debacle that falls squarely on the shoulders of this president and his administration.

I have a good friend that I worked with for a number of years. She’s one of those hundreds of photos you saw during the fall of Saigon. This person has never verbally discussed what it was liked trying to flee with the family in tow as a child. But I’ve read her accounts annually when she remembers the day as a little girl in a plane headed to the US. Decades later she and her own family are doing well here. But you can tell from her written words it’s something we can’t imagine. I can’t help but imagine that she’s emotional over what’s playing out now. Though we haven’t discussed it.

Imagine someone in Afghanistan so desperate they cling to the wheels of a departing airplane rather than stay. Only to fall a thousand feet to their death back on the runway below. That’s how desperate the situation is there. We failed every person in Afghanistan that we promised, “We’ve got your back.” Hardly. That’s a big problem when we insert ourselves into other countries.

Another very close friend of mine is beside herself today. She has served 6 month rotations in Afghanistan for the past several years. She and hundreds of others did have the backs of the people In Afghanistan. She got home earlier this year. She is heartbroken and mad about what she’s witnessing. Rightly so.

This is so reminiscent of my teen years back in high school. Carter was President and Reagan was waiting in the wings. American let a lot of people down back then too. But we healed and made things better, eventually.

I could say so much about the current ongoing blunders. But Benny Johnson’s photo above & below says it all. 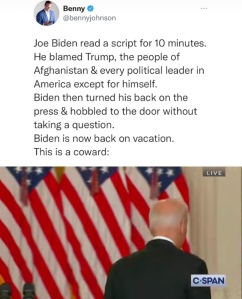