Posted on November 6, 2022 by tommystafford 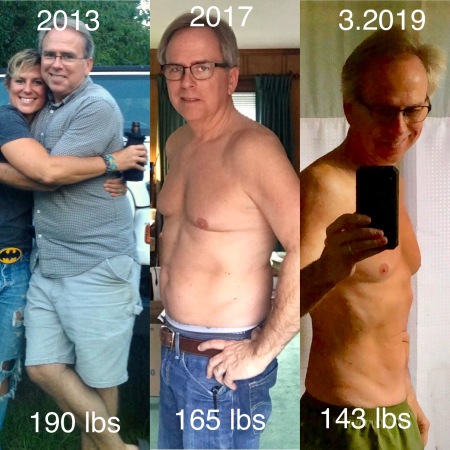 The varying stages of my weight through the years. My heaviest back in 2013 with my friend Pam. Look at the radial tire around my waist. My lowest weight was 143 back in 2019. I found the happy medium years later where I settled in around 150-155.

Six years ago on this very day I’d had enough. November 6, 2016. My pants were tight, my shirts were tight, I was fat. My blood pressure was bumping into pre-hypertensive territory  and even lying down in bed my heart raced with a pulse of 80-90 beats per minute. Today my heart rate is somewhere in the range of 48-55 BPM, resting.

There it is. November 6, 2016. I started walking. It’s all I could do back then. Even at that slow pace I got winded and could barely do it. Climbing hills required lots of rest in between, but I kept going and going. Good weather, bad weather. I kept going.

I certainly wasn’t going for time. I was just going. Back then I averaged a 30 minute per mile pace in November 2016. 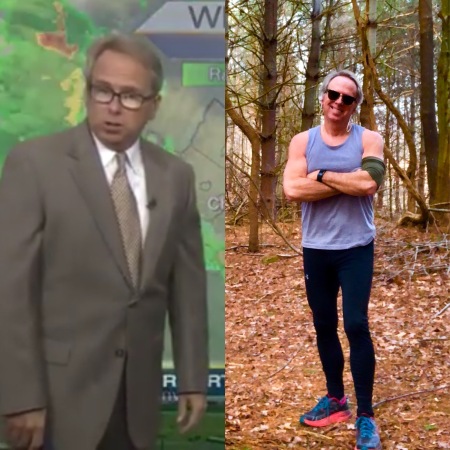 Once upon a time I was a TV weather guesser. I’d actually stopped doing that after years in the Memphis TV news market, but did some contract work here in Virginia after moving in 2004. That’s me on the left around 2015, on air in Charlottesville. On the right a couple of years later after getting serious about fitness.

Once I started walking it took about 6 months before I could run with any seriousness. I would jog the flat spots, rest, then run again. Later I was able to run the hills some, rest, then take off again. Something else I did during that time was stop drinking. Completely at the time. Look, I love having a glass of wine, or two, but alcohol is a killer for weightloss, especially as you age and metabolism slows. I dropped almost 15 lbs from that alone. Now that I’ve hit 60, I almost don’t drink, at all. Not because I don’t like it now and then, but the dent in your progress isn’t worth it to me anymore. Look, I’m not saying don’t enjoy life. You’ve gotta have ice cream and cake too! Otherwise, life isn’t worth living. But you also can’t drink a bottle or two or three of wine a week and expect much. At one time I was drinking 3 bottles of wine a week. You know alcohol belly when you see it, and it’s not pretty. 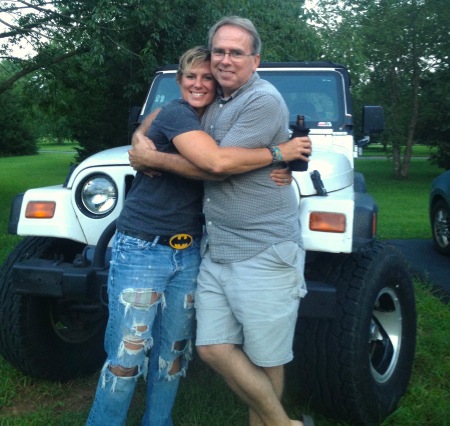 That’s a bigger photo of the split image above. My close friend Pam on the left that sold me her Jeep. I was my heaviest ever in life there at about 190 pounds around 2012-2013. I would regularly unbutton my pants and just let my belt hold my pants or shorts closed to give me “breathing room.” It was a disaster in the making. 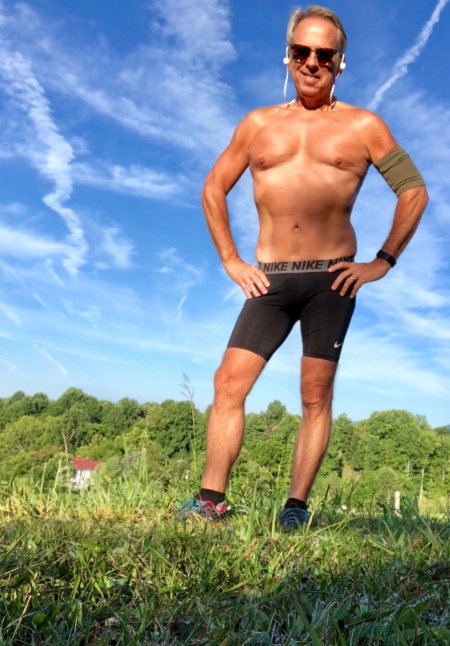 Five years after that photo above with Pam and the Jeep. This was August 2018 after I got my act together. Major difference.

What made me change? Several things. We had kids. That was weighing on my mind. My blood pressure was creeping up. At one point I was about 150/100. I didn’t want to take meds and be a slave to the pharmacy industry. Clothes were tight and I kept having to go up in sizes. I was flat out embarrassed to be at the beach or swimming pool shirtless. My wife was a workout, Spartan, Go Ruck, civilian Navy Seal training disciple at the time. And I was fat. As shit. 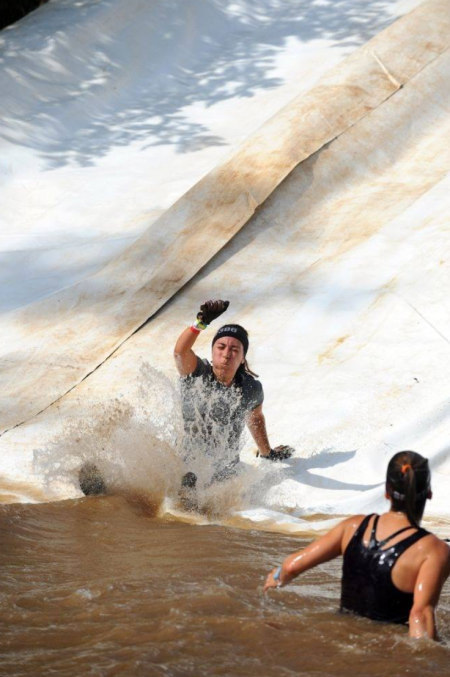 Photo courtesy of Paul Purpura – Wintergreen, Virginia : That’s Yvette at one of countless endurance races like this Spartan race in 2013 here in Virginia. She made it look so easy!

But one thing actually made me change and oddly nothing to do with those things I just listed above. They helped make the decision, but they weren’t the light bulb moment. 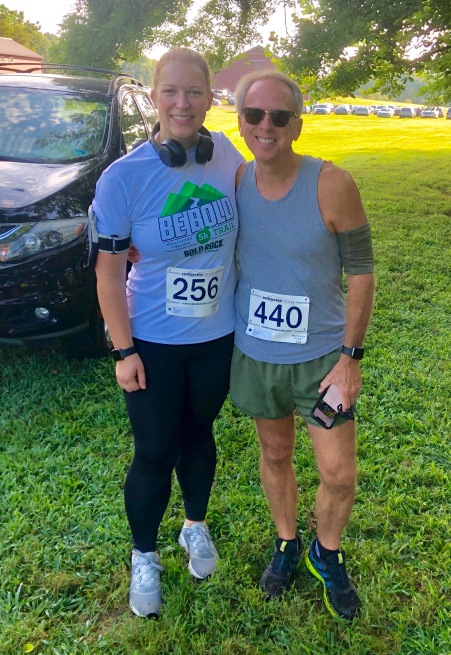 This woman on the left was the push that flipped my switch. At the time I didn’t even know her. I’d been seeing Renee Everhart’s weight loss progress on Facebook. Renee will tell you, she was grossly overweight, 310 lbs at one time. (That’s she and I at one of the many races we ran after becoming friends. This was one in 2019) Her doctors were recommending stomach surgery and such. She refused and said she would do it on her own. Much over 100 pounds of weight lost over time. Simply put, I said if this person who was morbidly overweight can do this and transform, I can. I looked at my wife that night and said that’s it. I am done living like this. I get started tomorrow. 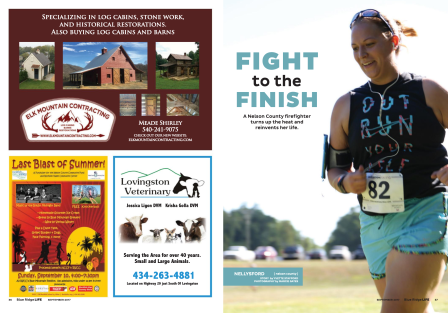 Renee’s journey was so remarkable we eventually did a story on her in the magazine that we owned at the time here in the Blue Ridge Mountains of Virginia. Click on the image above to read her complete story online.

Renee Everhart : Fight To The Finish : A Nelson County Firefighter Reinvents Herself

Renee’s story isn’t unique. Neither is mine. But they matter just as much. They show that with the right mindset anything can be done. I’m an amateur compared to what Renee accomplished, but again, it matters. 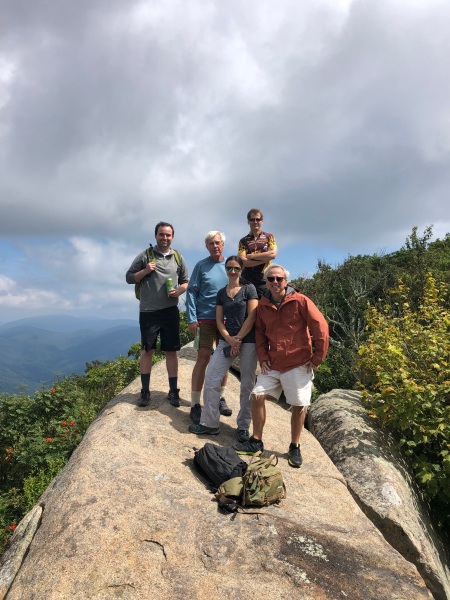 Before getting in shape hiking to the top of a mountain at nearly 4000′ would have been impossible for me. While this hike with some of my friends here a year or so ago wasn’t a piece of cake, I was fit and could handle it. This is all of us after reaching the top of The Priest mountain here in the Blue Ridge of Central Virginia in September 2019.

I ran alone here on the farm for years. In every kind of weather imaginable. Snow and blowing winds, summer heat and humidity that was just plain nasty. 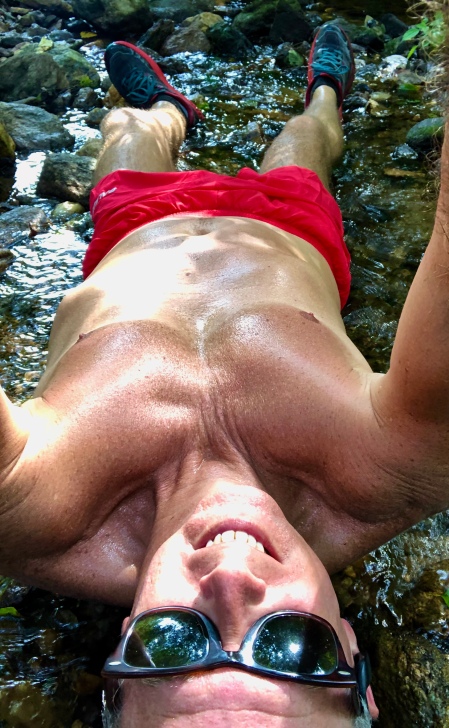 Cooling down in the stream that runs through our farm during one of those stagnant August afternoons in 2020. You could cut the air with a knife it was so thick.

I never forced our kids to workout. But I made sure they saw me doing it. Often. They’d already been watching their mom for years before me. And then one day back in May of 2021 something happened. 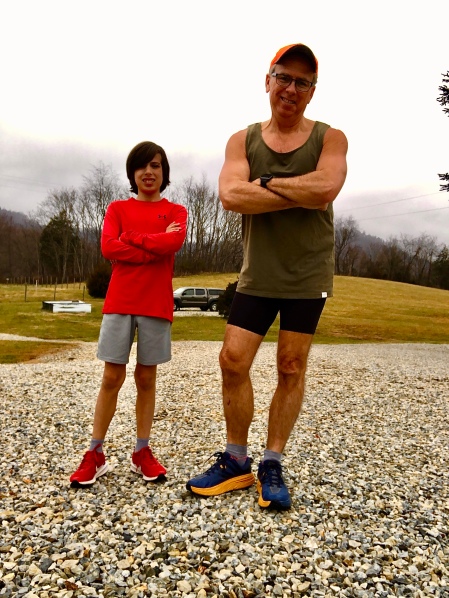 My son Adam asked if he could start running with me. You could have heard a pin drop. I was blown away. And of course I said yes. Now a year and a half later we’re still running together and he’s lifting and working out more than I do! That’s us above back in December 2021 a few months after he started running with me. 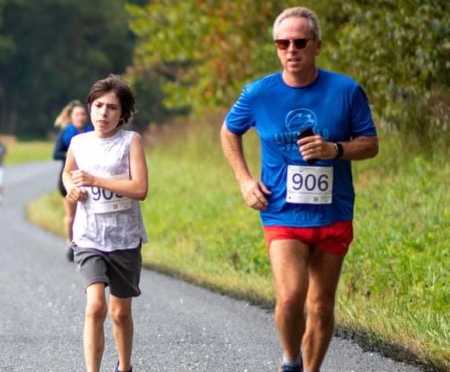 Now Adam and I have run a few races together and run often on the trails here at the farm. 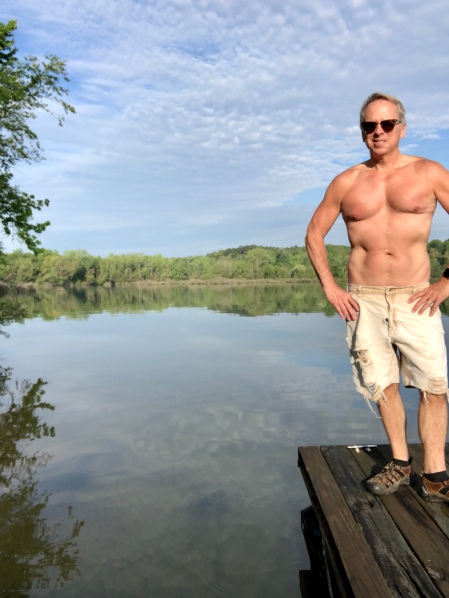 Over the years I started concentrating on weight and resistance workouts as well. Over time I was able to add muscle in addition to cardiac fitness. That’s me in 2020 at Kentucky Lake back in Tennessee.

I’m not trying to be a prize winning runner or lifter. That’s never been my goal. I simply wanted to get rid of the annoying weight. Get a decent level of fitness and be able to work around the farm without getting out of breath. The physique was secondary but a definite added bonus. 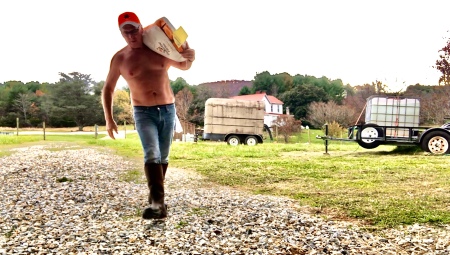 This is everyday’s business around the farm. Lots of lifting and moving feed and such. If I were in the shape from a few years ago, I’d never be able to keep up today. 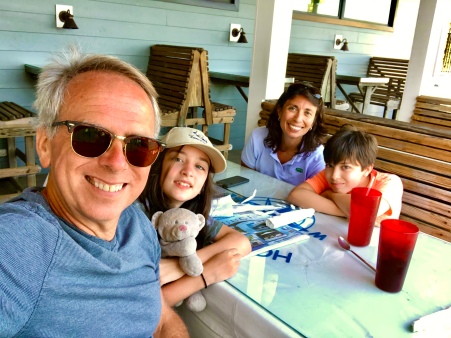 The absolute biggest reason to get in shape and stop procrastinating about it. Your family. It just makes life better all around. And, you know you’ll likely be around to see them grow up.

I don’t know if this anniversary reflection will help anyone flip their switch to get started, but I hope it does. One of my best friend’s mom used to say, “You never know who’s watching.” People see what you do. It inspires them. I bet Renee never thought her losing weight would make me get serious. But that was the straw.

It’s been a good six years. Not easy at times. A couple of injuries set me back for a short time. And yes, burnout happens and you take a break, then go back and pickup. But it’s become part of my life now and the landscape.

And a positive one for sure!

The varying stages of my weight through the years. My heaviest back in 2013 with my friend Pam. Look at the radial tire around my waist. My lowest weight was 143 back n 2019. I found the happy medium years later where I settled in around 150-155.